If you’ve been diagnosed with fibroid tumors, your doctor may recommend a myomectomy. With a myomectomy, your surgeon removes the fibroids and not your uterus. If you are considering surgery, ask your doctor about minimally invasive da Vinci® Myomectomy.

Myomectomy is the surgical remove of fibroid tumors while leaving your uterus in place. Each year, roughly 65,000 myomectomies are performed in the U.S.

After cutting around and removing each uterine fibroid, the surgeon must carefully repair the uterine wall to minimize potential uterine bleeding, infection and scarring. Proper repair is also critical to reducing the risk of uterine rupture during future pregnancies. 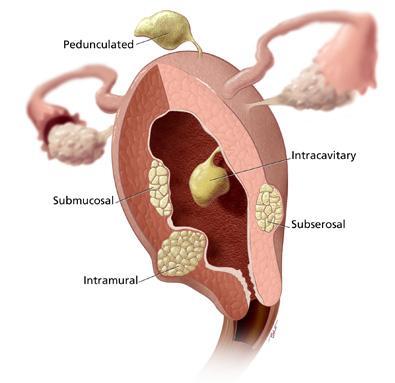 During traditional laparoscopy, long-handled surgical instruments are inserted through the incisions. One of the instruments is a laparoscope – a thin, lighted tube with a tiny camera at the end. The camera takes images inside your body and those images are sent to a video monitor which guides surgeons as they operate.

With minimally invasive da Vinci myomectomy, surgeons make a few small incisions instead of a large incision – similar to traditional laparoscopy. The da Vinci System features a magnified 3D high-definition vision system and special wristed instruments that bend and rotate far greater than the human wrist. As a result, da Vinci enables your surgeon to operate with enhanced vision, precision, dexterity and control.

State-of-the-art da Vinci uses the latest in surgical and robotics technologies and is beneficial for performing complex surgery. Your surgeon is 100% in control of the da Vinci System, which translates his or her hand movements into smaller, more precise movements of tiny instruments inside your body. da Vinci – taking surgery beyond the limits of the human hand.

With the da Vinci System, surgeons operate through a few small incisions instead of a large open incision – similar to traditional laparoscopy. The da Vinci System features a magnified 3D HD vision system and special wristed instruments that bend and rotate far greater than the human wrist. These features enable your surgeon to operate with enhanced vision, precision, and control.

State-of-the-art da Vinci uses the latest in surgical and robotics technologies. Your surgeon is 100% in control of the da Vinci System, which translates his or her hand movements into smaller, more precise movements of tiny instruments inside your body. da Vinci – taking surgery beyond the limits of the human hand.

Tear or hole in uterus, split or bursting of the uterus, pre-term (early) birth, spontaneous abortion. Patients undergoing a myomectomy who have an undiagnosed cancer may be at risk of having cancer cells spread through the abdomen if a fibroid is cut into pieces for removal.

Serious complications may occur in any surgery, including da Vinci® Surgery, up to and including death. Individual surgical results may vary. Patients should talk to their doctor to decide if da Vinci Surgery is right for them. Patients and doctors should review all available information on non-surgical and surgical options in order to make an informed decision. Please also refer to http://www.daVinciSurgery.com/Safety for Important Safety Information.

WHEN IS SINGLE-SITE TECHNOLOGY USED AND WHAT ARE THE RISKS?

da Vinci Surgery with Single-Site® Instruments is cleared for use in gallbladder removal, and for hysterectomy and ovary removal for benign conditions. Patients who are not candidates for non-robotic minimally invasive surgery are also not candidates for da Vinci Surgery, including da Vinci Surgery with Single-Site Instruments. There may be an increased risk of incision-site hernia with single-incision surgery, including Single-Site surgery with the da Vinci System. Single-Site® Instruments for the da Vinci® Si™ System bear the CE mark. This device is cleared for commercial distribution in the U.S. for laparoscopic cholecystectomy, and for hysterectomy and salpingo-oophorectomy for benign conditions.

DISCLAIMER: While clinical studies support the effectiveness of the da Vinci Surgical System when used in minimally invasive surgery, individual results may vary. There are no guarantees of outcome. All surgeries involve the risk of major complications. Before you decide on surgery, discuss treatment options with your doctor. Understanding the risks of each treatment can help you make the best decision for your individual situation. Surgery with the da Vinci Surgical System may not be appropriate for every individual; it may not be applicable to your condition. Always ask your doctor about all treatment options, as well as their risks and benefits. Only your doctor can determine whether da Vinci Surgery is appropriate for your situation. The clinical information and opinions, including any inaccuracies expressed in this material by patients or doctor about da Vinci Surgery are not necessarily those of Intuitive Surgical, Inc. and should not be considered as substitute for medical advice provided by your doctor. All persons depicted are models unless otherwise noted.

Dr. Tam and All For Women Healthcare has received the Center of Excellence in Minimally Invasive Gynecology (COEMIG) designation by the American Association of Gynecologic Laparoscopists (AAGL) and the Surgical Review Corporation (SRC)!

“By complying with the COEMIG requirements, surgeons and facilities demonstrate a commitment and ability to consistently deliver the highest level of minimally invasive gynecologic surgical care possible. Earning the COEMIG designation will signify that the facility and surgeon are among the best in the specialty, which will be an important distinction in both patient and professional settings.” - SurgicalReview.com

We accept several insurance plans from many different providers. If you do not see your provider listed here, please give us a call and we will let you know if you are covered.

Words from our patients